We Were Eight Years in Power: An American Tragedy (Hardcover) 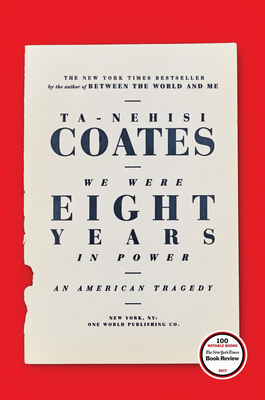 Available in our warehouse

In this “urgently relevant”* collection featuring the landmark essay “The Case for Reparations,” the National Book Award–winning author of Between the World and Me “reflects on race, Barack Obama’s presidency and its jarring aftermath”*—including the election of Donald Trump.

“We were eight years in power” was the lament of Reconstruction-era black politicians as the American experiment in multiracial democracy ended with the return of white supremacist rule in the South. In this sweeping collection of new and selected essays, Ta-Nehisi Coates explores the tragic echoes of that history in our own time: the unprecedented election of a black president followed by a vicious backlash that fueled the election of the man Coates argues is America’s “first white president.”

But the story of these present-day eight years is not just about presidential politics. This book also examines the new voices, ideas, and movements for justice that emerged over this period—and the effects of the persistent, haunting shadow of our nation’s old and unreconciled history. Coates powerfully examines the events of the Obama era from his intimate and revealing perspective—the point of view of a young writer who begins the journey in an unemployment office in Harlem and ends it in the Oval Office, interviewing a president.

We Were Eight Years in Power features Coates’s iconic essays first published in The Atlantic, including “Fear of a Black President,” “The Case for Reparations,” and “The Black Family in the Age of Mass Incarceration,” along with eight fresh essays that revisit each year of the Obama administration through Coates’s own experiences, observations, and intellectual development, capped by a bracingly original assessment of the election that fully illuminated the tragedy of the Obama era. We Were Eight Years in Power is a vital account of modern America, from one of the definitive voices of this historic moment.

Ta-Nehisi Coates is a national correspondent for The Atlantic. His book Between the World and Me won the National Book Award in 2015. Coates is the recipient of a MacArthur Fellowship. He lives in New York City with his wife and son.

“A master class . . . Anyone who wants to know who we are—and where we are now—must sit with [Ta-Nehisi Coates] for a good while. . . . It should inspire us as writers, and as Americans, that he urges us . . . to become better—or at least clearer on why we’re not.”—Kevin Young, The New York Times Book Review

“Ta-Nehisi Coates has published a collection of the major magazine essays he wrote throughout the Obama years. . . . But Coates adds an unexpected element that renders We Were Eight Years in Power both new and revealing. Interspersed among the essays are introductory personal reflections. . . . Together, these introspections are the inside story of a writer at work, with all the fears, insecurities, influences, insights and blind spots that the craft demands. . . . I would have continued reading Coates during a Hillary Clinton administration, hoping in particular that he’d finally write the great Civil War history already scattered throughout his work. Yet reading him now feels more urgent, with the bar set higher.”—Carlos Lozada, The Washington Post

“Indispensable . . . bracing . . . compelling . . . A new book from Coates is not merely a literary event. It’s a launch from Cape Canaveral.”—Jennifer Senior, The New York Times

“Biting cultural and political analysis from the award-winning journalist . . . [Ta-Nehisi Coates] reflects on race, Barack Obama’s presidency and its jarring aftermath, and his own evolution as a writer in eight stunningly incisive essays. . . . He contextualizes each piece with candid personal revelations, making the volume a melding of memoir and critique. . . . Emotionally charged, deftly crafted, and urgently relevant.”—Kirkus Reviews (starred review)

“Coates’s collection of his essays from the past decade examine the recurrence of certain themes in the black community, the need for uplift and self-reliance, the debate between liberals and conservatives about the right approach to racism, and the virulent reaction in some quarters to any signs of racial progress. . . . Coates’s always sharp commentary is particularly insightful as each day brings a new upset to the cultural and political landscape laid during the term of the nation’s first black president. . . . Coates is a crucial voice in the public discussion of race and equality, and readers will be eager for his take on where we stand now and why.” —Booklist (starred review)

“Though the essays are about a particular period, Coates’s themes reflect broader social and political phenomena. It’s this timeless timeliness—reminiscent of the work of George Orwell and James Baldwin—that makes Coates worth reading again and again.”—Publishers Weekly (starred review)

This feature require that you enable JavaScript in your browser.
END_OF_DOCUMENT_TOKEN_TO_BE_REPLACED

This feature require that you enable JavaScript in your browser.
END_OF_DOCUMENT_TOKEN_TO_BE_REPLACED